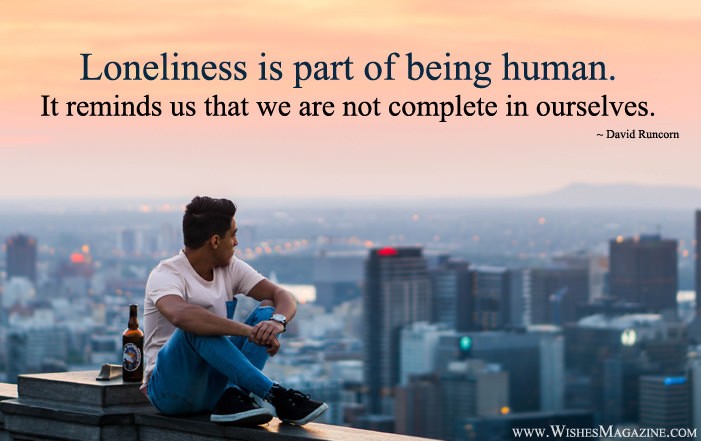 When we truly realize that we are all alone is
when we need others the most.
~ Ronald Anthony

People are lonely because they build walls instead of bridges.
~ Joseph F. Newton

Loneliness and the feeling of
being unwanted is the most terrible poverty.
~ Mother Teresa

The most terrible poverty is loneliness,
and the feeling of being unloved.
~ Mother Teresa

Loneliness the clearest of crystal insight into your own soul,
Its the fear of one’s own self that haunts the lonely.
~Keith Haynie

Loneliness is the poverty of self;
Solitude is the richness of self.
~May Sarton

Loneliness is about the scariest thing there is.
~ Anonymous

All great and precious things are lonely.
~ John Steinbeck

Loneliness is part of being human.
It reminds us that we are not complete in ourselves.
~ David Runcorn

It is usually expensive
and lonely to be principled.
~ Paul Theroux

Nothing makes us so lonely as our secrets.
~ Paul Tournier

Loneliness is the first thing
which God’s eye named, not good.
~ John Milton

The surest sign of age is loneliness.
~ Annie Dillard

Loneliness is and always has been the central
and inevitable experience of every man.
~ Thomas Wolfe

Loneliness can be conquered only by
those who can bear solitude.
~ Paul Tillich

Loneliness is proof
that your innate search for connection is intact.
~ Martha Beck

There is no loneliness greater than the loneliness of a failure.
The failure is a stranger in his own house.
~ Eric Hoffer

Loneliness leads to nothing good, only detachment.
And sometimes the people who most need to reach out
are the people least capable of it.
~ Joss Whedon

I believe a lot of disease comes from anxiety, loneliness.
~ Tom Cochrane

Solitude is pleasant. Loneliness is not.
~ Anna Neagle

Being human is the most terrible loneliness in the universe.
~ A.A. Attanasio