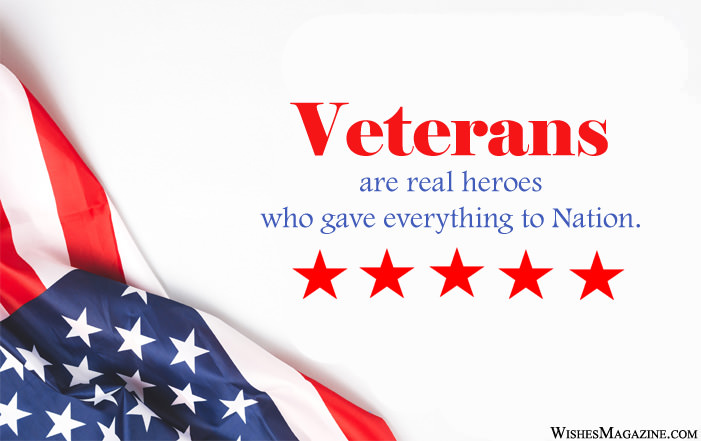 Most Famous Veterans Day Quotes Sayings to Honor our Veterans

Many people are serving in the United States Armed Forces,they serve their lives to the safety of U.S People, then in the United States whole U.S people Honors to Who have served in the U.S Armed Forces that day is called Veterans Day, it is observed on November 11 every year.
This year U.S celebrated November 11 this Veterans Day and Veterans day almost near. All the us people are searching for latest veterans day quotes for sending wishes and greetings on this special occasion and here you will find popular Veterans day quotes.

This nation will remain the land of the free
only so long as it is the home of the brave.
~Elmer Davis

Regard your soldiers as your children, and they will follow you into the deepest valleys.
Look on them as your own beloved sons, and they will stand by you even unto death!
~Sun Tzu

A hero is someone who has given
his or her life to something bigger than oneself.
~Joseph Campbell

Without heroes, we are all plain people,
and don’t know how far we can go.
~Bernard Malamud

Courage is contagious. When a brave man takes a stand,
the spines of others are often stiffened.
~Billy Graham

Better than honor and glory, and History’s iron pen,
Was the thought of duty done and the love of his fellow-men.
~ Richard Watson Gilder

On this Veteran’s Day, let us remember the service of our veterans,
and let us renew our national promise to
fulfill our sacred obligations to our veterans and their families
who have sacrificed so much so that we can live free.
~Dan Lipinski

Honor to the soldier and sailor everywhere,
who bravely bears his country’s cause. Honor, also,
to the citizen who cares for his brother
in the field and serves, as best he can, the same cause.
~Abraham Lincoln

The Willingness of America’s veterans
to sacrifice for our country has earned them our lasting gratitude.
~Jeff Miller

How important it is for us to recognize
and celebrate our Heroes and She-roes!
~Maya Angelou

Valor is stability, not of legs and arms,
but of courage and the soul.
~ Michel de Montaigne

The willingness with which our young people are likely to
serve in any war, no matter how justified,
shall be directly proportional to how they perceive the veterans
of earlier wars were treated and appreciated by their nation.
~George Washington