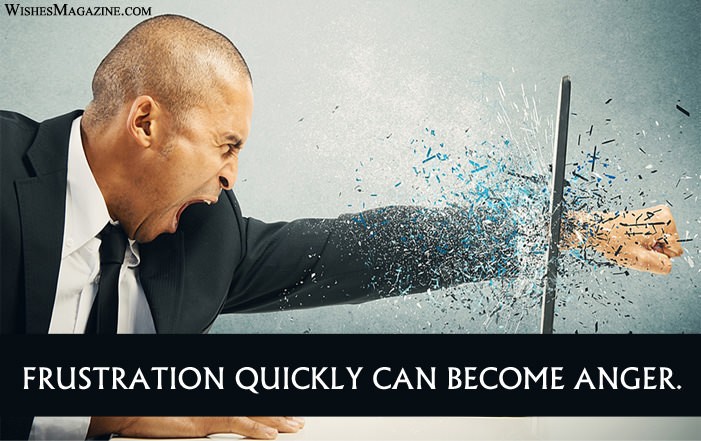 Our frustration is greater when we have much
and want more than when we have nothing and want some.
We are less dissatisfied when we lack many things
than when we seem to lack but one thing.
~ Eric Hoffer

Frustration is big motivation.
When you get frustrated, you get motivated double than that.
~ Anonymous

Frustration is an interesting emotional state,
because it tends to bring out the worst in whoever is frustrated.
Frustrated babies tend to throw food and make a mess.
Frustrated citizens tend to execute kings and queens and make a democracy.
And frustrated moths tend to bang up against lightbulbs
and make light fixtures all dusty.
~ Lemony Snicket, The Wide Window

Frustration, although quite painful at times,
is a very positive and essential part of success.
~ Bo Bennett

Frustration is fuel that can lead to
the development of an innovative and useful idea.
~ Marley Dias

There’s so much frustration.
~ Melanie Doane

Life is not an easy matter…
You cannot live through it without falling into frustration
and cynicism unless you have before you a great idea
which raises you above personal misery, above weakness,
above all kinds of perfidy and baseness.
~ Leon Trotsky

There is always frustration from people
who work in schools that things keep changing
but it is an unfortunate truth with the world of work changing
as rapidly as it is, we do have to change.
~ Jim Knight

Stress is the reason for crime and all other kinds of frustration.
To relieve it will eliminate everything else.
~ Maharishi Mahesh Yogi

Frustration although quite painful at times,
Is a very positive and essential part of success.
~ Bo Bennet

You can only sit on the frustration of wanting to express something for so long.
~ William Hurt

Frustration is a sign I am acting independently.
The more you try your own way, the tighter the doors will stay closed.
~ Joyce Meyer

Frustration is the feeling that accompanies an experience of
being thwarted in attaining your goals.