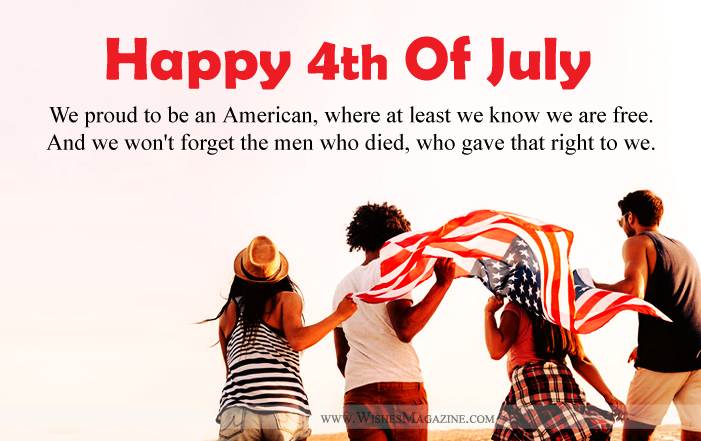 The Fourth of July isn’t all about barbecues and fireworks.
It’s also about freedom, liberty and the birthday of our country.

I’m proud to be an American,
where at least I know I’m free.
And I wont forget the men who died,
who gave that right to me.

The American flag is the symbol of our freedom,
national pride, and history.
~ Mike Fitzpatrick

We must be free not because we claim freedom,
but because we practice it.
~ William Faulkner

America is hope. It is excellence.
It is valor.
~ Paul Tsongas

America was built on courage,
on imagination and an unbeatable determination.
~ Harry S. Truman

Red is for victory white is for purity blue is
for loyalty USA where courage n’ Fortitude is the Norm!

It feels proud to be part of
a nation as great as America.

As we celebrate our 4th July,
we honor the courageous men and women
dedicated to preserving it.

On our beloved Nation’s Independence Day,
Let’s remember and salute
the souls that went down for the national pride.

The American flag represents all of us
and all the values we hold sacred.”
~ Adrian Cronauer

America was not built on fear. America was built on courage,
on imagination, and unbeatable determination to do the job at hand.
~ Harry S. Truman

4th of July is a date of utmost significance to
every American because it is on this day we achieved
our freedom from colonialism.

Always remember the reason why we are celebrating 4th july
and we will never take it lightly.

Everything that is really great and inspiring is created
by the individual who can labor in freedom.
~ Albert Einstein, physicist